Equipping The Next Generation of Creators & Makers

CODE FOR LIFE is an exciting new collaborative initiative that unites Nyack College, Praxis Connections, the tech community, and local church partners. CODE FOR LIFE combines the proximity of (and therefore ease of access to) neighborhood churches, the resources of Nyack College’s math and science departments, and the expertise of technology professionals to bring practical tools for professional and economic success to kids living in high poverty neighborhoods. CODE FOR LIFE employs  and methodology of change that will transform the way young people view themselves and their future through vision casting, life and technology coaching, case management, positive peer group experiences, and skill building—especially as it relates to coding.

By participating in CODE FOR LIFE, young people in high-poverty neighborhoods can develop practical life skills and the  proficiency they’ll need to thrive for the rest of their lives. Our mission at CODE FOR LIFE is to create an on ramp to the new technology economy for the young people living in high-poverty neighborhoods by means of a church-based technology program.

Our labor market is becoming increasingly more digital, data-driven and automated. We are now in a race between how quickly we are able to equip the workforce for our accelerating tech-driven economy. This shift significantly reduces the number of well-paying unskilled jobs associated with the economy of the past. Those living in under-resourced communities lacking access to skill development opportunities are at the greatest risk of being left behind. However, our city and nation can ill-afford to leave its young people out of the tech-driven economy. To remain competitive, the economy of the future requires a diverse and highly-skilled workforce.

Since 1990 the U.S. labor market has experienced a 79% increase (9.7 million to 17.3 million) in employment related to science, technology, engineering and math (STEM) occupations. Computer jobs alone have increased by 338% over the same period. In fact, New York City’s competitive advantage is largely tied to growth in STEM fields – the tech ecosystem added 45,000 jobs between 2003 and 2013, outperforming the overall rate of employment growth in the City and the nation. Further, the New York City tech ecosystem includes 291,000 jobs that facilitate, produce, or are enabled by technology.  Despite this growth, challenges remain in how to expand these opportunities to those living in under-resourced communities.

Opportunities in the STEM sector provide new pathways for success. Typical workers in the STEM field earn significantly more, on average, when compared to typical non-STEM workers. The median earnings for STEM workers 25 and older were $71,000 in 2016, yet non-STEM workers earned approximately $43,000, 40% less than their STEM counterparts.

With the erosion of the manufacturing industry, the STEM sector provides career opportunities that do not require a post-secondary degree as an entry ticket to earning a higher income. For example, computer tech support and website development roles do not require a bachelor’s degree, yet provide an annual median wage of approximately $63,000 and $66,000 respectively. In fact, a report commissioned by the Associate for a Better New York, Citi, Google, and the NY Tech Meetup, found 44% of the City’s 291,000 tech jobs do not require a bachelor’s degree and offer hourly pay rates that are 49% above the City average.

Additionally, growth in the tech ecosystem provides a measurable value-add to the City’s economy – approximately 7% of the City’s workforce is employed directly in the technology sector producing 12.3% of the tax revenue ($5.6 billion) to the City.

Overall, the New York City workforce is 44% white, 23% black or African American, 28% Latina/o and 15% Asian. However, in 2015 the STEM workforce was 69% white, only 6.5% black or African American, 6.7% Latina/o or Hispanic, and 16.6% Asian. The STEM workforce represents companies such as Google, Facebook, and Thompson Reuters that consider New York its home. These companies will need a steady flow of talent to remain competitive. Therefore, we will need to draw from the talent of all of NYC and develop a diverse and well-prepared cadre of emerging professionals to keep pace with the speed and breadth of our tech-enabled economy.

Code for Life Theory and Methodology of Change

Code for Life employs a theory and methodology of change that transforms the way young people view themselves and their future by equipping them with the life and tech skills needed to thrive in our new digital and data-driven economy.  Code for Life is built on the following four-part framework: Neighborhood Focused, Blended Youth & Tech Development, Collective/Collaborative Approach, and Outcomes-Measurement Disciplined.

Together this framework facilitates impact in the lives of young people, the neighborhood, and our city.

Neighborhood Focused: Code for Life believes that proximity and becoming a part of the local social context is an important part of creating lasting impact. This focus develops the tech-ecosystem of the neighborhood and a pipeline of young coders!

Blended Youth & Tech Development: Code for Life has developed a unique approach that incorporates both youth and tech development embodied in our methodology of Life Coaching, Case Management, and Vision Casting.

Collective/Collaborative Impact: Our collective impact approach benefits from resources of Nyack College’s math and science departments, local networks of schools and churches, and from the expertise of technology professionals committed to local youth development.

Outcomes-Measurement Disciplined: Our Creator & Maker Cross Training has specific and clearly defined Learning Objectives where we track student progress and skill development to improve our outcomes over time. 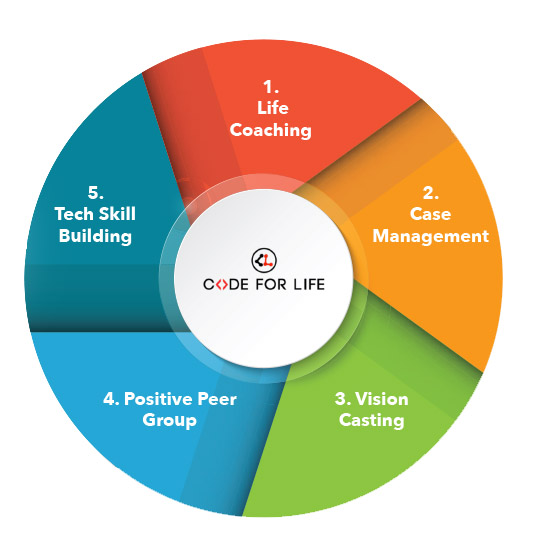 Code for Life launched its work in East Harlem in January 2019 and has developed a two part strategy to strengthen and expand its impact over the course of the next year. First, it will provide its Creator & Maker Cross Training to youth and young adults living in the East Harlem community, delivering the Web Basics course to 90 students and then its Coding Development course in JavaScript & Python to 72 of those students by the end of 2020.

The next part is dedicated to facilitating future replication and leadership development. Code for Life is launching the Code for Life Intern training program to develop the leadership it will need to replicate in other under-resourced neighborhoods. This training will cover all aspects of the Code for Life methodology. Each intern will be selected based on their tech knowledge and ability to connect with youth and collaborate with community partners. Code for Life will hire two summer interns in 2019 and four in the fall of 2019 to assist the Life Code Coach in delivering the Creator & Maker Cross training.